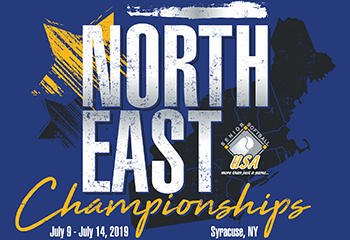 SYRACUSE, N.Y. - The 2019 Northeast Championships, held here for an eighth straight year, drew 54 teams representing eight states from around the region, as well as Canada.

An original Tournament of Champions qualifier, the tournament took place July 9-14 at Hopkins Road Park, along with Santaro Park Fields for overflow.

The tournament began with the Men’s 65-80 age divisions on July 9.

Of the three, Brantford Nissan Seniors would go on to complete an undefeated week, posting a 4-0 mark in the bracket, including an 18-12 win over Bradford White/Jersey Masters in the championship game. 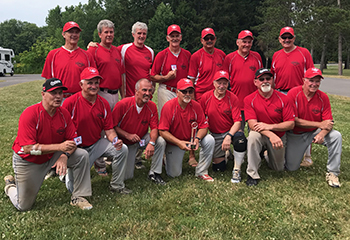 Bradford White/Jersey Masters escaped from the elimination side of the bracket with three straight wins to reach the championship game, en route to their runner-up finish.

Spring-Ford AA 65 (PA) finished in third place after going 3-2 in the bracket. 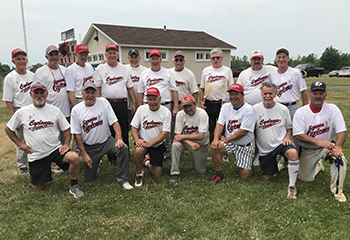 Syracuse Cyclones 65 won three straight games in the elimination side of the bracket en route to their runner-up finish.

The six-team Men’s 75/80 Gold Division was broken off into three separate best of three series.

In the Men’s 75 AAA Division, Syracuse Cyclones (NY) defended its home turf against Rochester Chess (NY), sweeping the series by scores of 11-3 and 18-3, respectively. 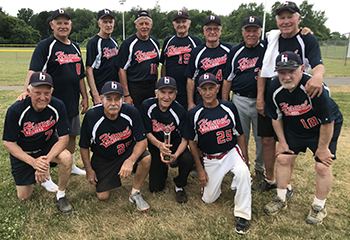 Finally, in the Men’s 80 AAA Division, to close out the first session, Peach Tree Restaurant (PA) swept hometown Syracuse Cyclones, by scores of 14-7 and 13-6, respectively. 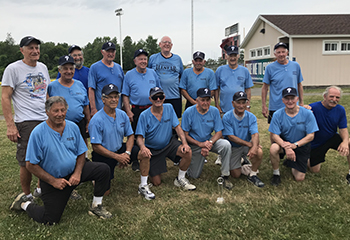 Starting off with the four-team Men’s 40 Masters Gold Division, Giant Steel/TRUE Point Survey (NY) avenged its 22-17 loss in the championship game against Ferra’s/Bob Johnson/Oxfords Pub, with a 22-11 win in the “if” game.

In the five-team Men’s 50 Major Division, Hard Hat Café/Latella’s/Vio’s Sports (CT) polished off an undefeated weekend, going 2-0 in seeding to lock up the top seed, before running off three straight in bracket play, including a 25-21 win over Homer Lovers (ON, Canada). 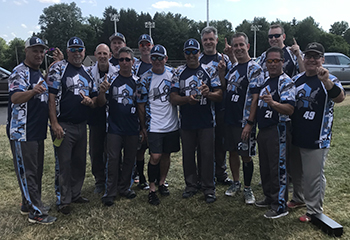 Trailing 16-10 heading into the open inning of the championship game, OSS/Phil’s Painting scored eight runs to go ahead 18-16.

Going into the bottom half of the open, Finance of America plated the three runs it needed to complete the comeback win for the title.

OSS/Phil’s Painting entered the championship game on fire, winners of four straight to escape the elimination side of the bracket.

The bracket would also feature competitive play throughout, as the division came down to the “if” game.

Dropping down into the elimination side of the bracket, Olympian Athletics eliminated Phoenix Tube (NJ), 16-13, in the third-place game, to secure their spot in the championship game, setting up a rematch.

Olympian Athletics would get its revenge, double-dipping Buell Fuel, 27-20 and 9-7, respectively, in the championship and “if” game. 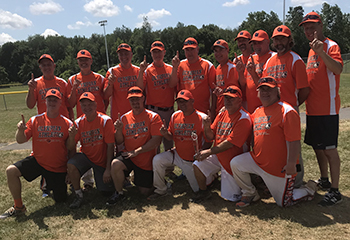 Action Auto Parts continued its flawless play in the bracket, going 3-0, including a 20-11 victory over Deep Purple 60 (MA), in the championship game.

New England Merchants 55 (MA) finished in third place to round out the top three finishers.

The four-team Men’s 60 AAA Division featured a full three-game round robin to seed, before going into a double-elimination bracket.

Berkley Home Remodeling (DE) took the top seed going 3-0 in seeding. The team continued its strong play in bracket play, going 3-0, including an 18-11 win over Buell Fuel in the championship game. 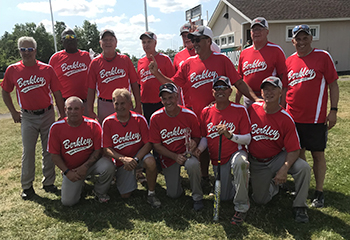 The four-team Men’s 60 AA Division would come down to the “if” game, as Syracuse Cyclones (NY) came out of the elimination side of the bracket to double-dip Vernon Vipers (CT), in the championship and “if” game, by scores of 16-9 and 21-8, respectively. 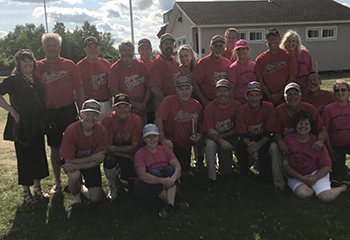 Vernon Vipers slipped past Syracuse Cyclones, 6-5, earlier in the bracket to advance to the championship game; while Syracuse Cyclones bounced back with a 22-8 win over Diamond Dawgs (MA) in the third place game.