Northeast Championships Returns in 2021 With 54 Teams 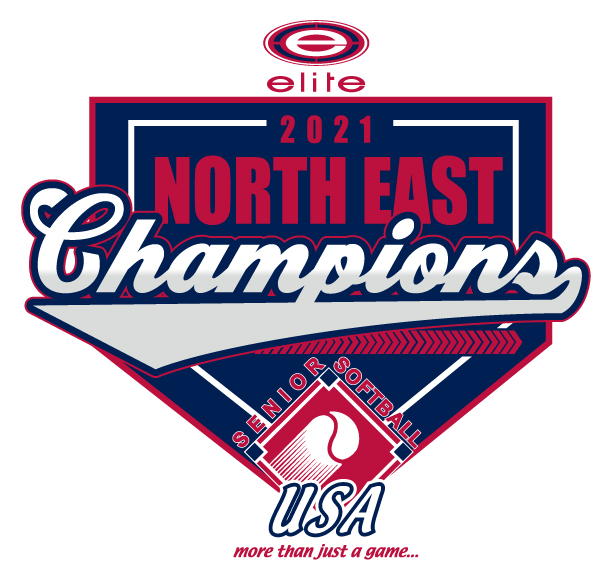 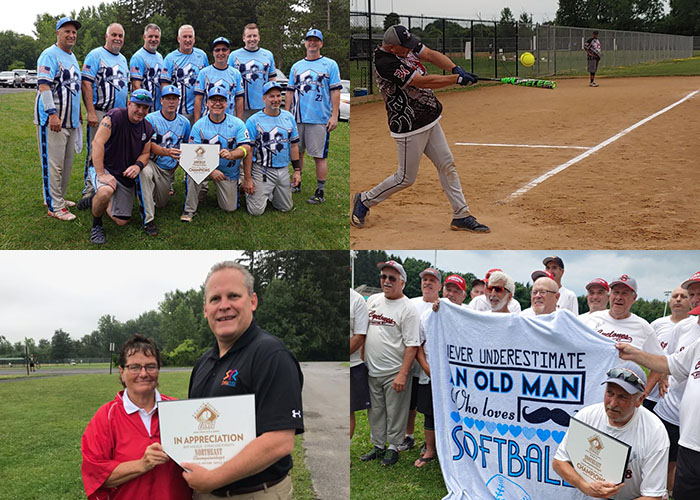 Rain showers shortened the first day of both sessions of the tournament, on Tuesday and Friday.

“On Tuesday, we played two rounds and had to cancel the rest of the day,” said Tournament Director Gayle Collins.  “We reworked the schedule so if it (rain) happened again we would have winners in each division.”

As a result, the first session (65-80 divisions) lost only one seeding game and the second session (40-60) didn’t lose any games because directors used shortened game times on Friday.

The oldest division, 75 / 80 AAA, had four 75 AAA teams and one 80 AAA.  The Long Island Jaguars 75s of New York won the division in thrilling fashion, beating the Bostonian 75s of Massachusetts 17-16 in the Championship game.

The teams tied 9-9 in the fourth inning, then tied again 11-11 in the fifth.  The Jaguars pulled ahead 15-13 in the sixth inning and Bostonians pushed to a 16-15 lead in the top of the seventh inning.  Jaguars came back with the two runs they needed in the bottom of the inning to win the game and the championships.

The 65/70 Gold Division was a mix of 10 teams that played blended pool games, then broke into three sets of finals.

In the 65 Major playoffs, Promotion of New Jersey defeated Deep Purple of Massachusetts 15-10 in the championships game to win.  Deep Purple advanced from the elimination bracket to the final game by beating New Jersey Hitmen, who came in third place, 10-9.

In the 65 AAA Division, Talaga Construction of Connecticut defeated Cellular Sales of New York 21-12, then beat the Rochester (NY) Royals 19-6 to advance to the championship game against Cellular.  In the finals, Cellular, in its fourth game of the bracket, ran out of steam and Talaga prevailed 32-13 to win the division.

In the 65/70 Silver Division, with two 70AAA and one 65 AA, it was a battle of Syracuse Cyclones for the title.  The Cyclones 70s advanced to the finals after beating the Rochester Royals 70s in bracket play and faced their young brothers – the Cyclones 65s.  The Cyclone 70s took the lead early in the game and never lost it, defeating the Cyclone 65s 13-8.

In the second session of the Northeast Championships, the Roosters of New York pounded through the large 10-team 40s division with lopsided seeding scores (20-4 and 18-4), before skating through the bracket with four straight wins.  The Roosters beat Giant Steel/ True Point of New York 28-7, then First Capital of New York 23-9, and Vinnie’s Hitmen of Pennsylvania 24-20.

The Roosters faced Vinnie’s again in the Championship game and again won 24-9.

In the six-team 50 Major Division, Trinity Home Renovations of New York had a perfect weekend of five straight victories to clinch the title.  Trinity went 2-0 in seeding play and in bracket play beat Roebell/Paradise of New York 11-7, then Union Meeting/Phoenix Tube of Pennsylvania 17-9 to advance to the championship game.

Finance of America of New Jersey won each of its bracket games by a single run to take the 50AAA championships.  Finance beat Fat Chops /4 Season of Massachusetts 21-20, then edged the Pennsylvania Senior Hitmen in the semifinals (15-14) and again in the finals (11-10).

Gashouse of New York came in third – and missing a shot at the championships by one run.  Gashouse lost to the Hitmen, sending the Hitmen to the finals.

The 55/60 Gold was a mixed division of 60 Major-Plus, 55 Major and 55AAA teams that combined for pool games and then broke into two divisions for the finals.

In close competition in the 55 AAA division finals, the 55 Finance of America team of New Jersey double-dipped Syracuse Crunch of New York 19-16 and 21-20 to win the championships. In an earlier bracket game, Finance edged the Crunch 18-17 on its path to victory.

In the 60 Major Division, Action Auto Parts of Rhode Island won in a series of low-run games after defeating all three other Major teams in seeding play.  Action Auto beat Olympian Athletics of Pennsylvania 8-3, then Pittsburgh North 10-8, before facing Olympian again in the finals.  Action Auto continued its streak, defeating Olympian 14-5 for the title.

In the 60 AAA Division, Ockers Company of Massachusetts won two of its three bracket games by one run on its way to the title.  Ockers beat the Syracuse Cyclones 16-15, then Northeast Jackhammers of New York twice: 21-6 and scoring 4 runs in the bottom of the seventh to win 13-12 in the Championship game.

The Cyclones came in third.

In the 60 AA Division, the Diamond Dawgs of Massachusetts won the bracket decisively, beating the Vernon Vipers of Connecticut twice: 26-7 and 21-14 in the championship game.  The New York Capitals were third.