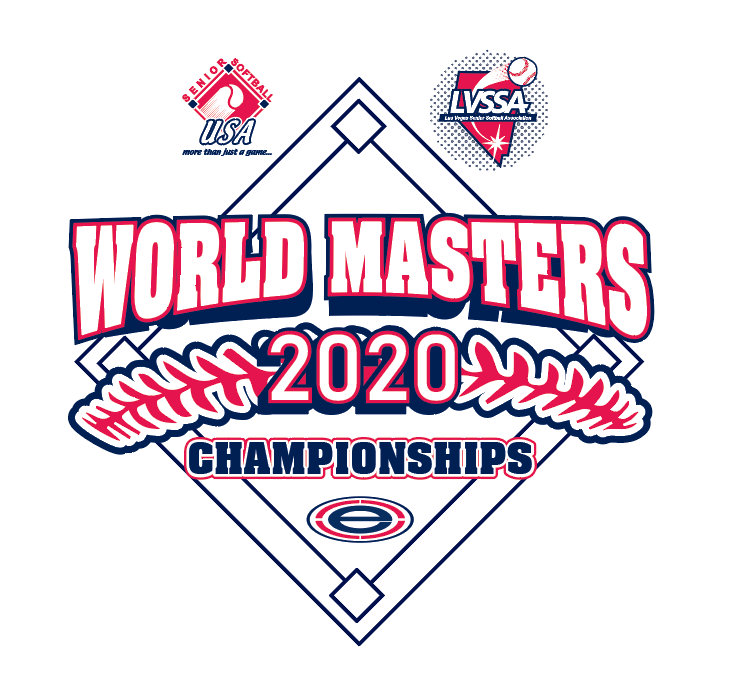 ST. GEORGE, Utah - The World Masters Championships continued here with session two on Sept. 21, as the elder statesmen of the game, the Men’s 65 – 85 age divisions, took to the fields.

A total of 94 teams, representing 22 states, played across 13 divisions on four complexes over a three-day span.

Of the three teams, Venom (FL), 75 Major, would go on to complete the Triple Grand Slam.

There was no surprise winner in the three-team Men’s 65 Major Plus Division, as Timberworks/Adidas (CA) once again claimed the World Masters title.

Timberworks entered bracket play as the #2 seed, and posted a perfect 3-0 record, including a 25-10 win over top seed MN Masters/Ancell in the championship game.

For Timberworks, this is the team’s fifth straight WMC title.

Additionally, as the Western National and U.S. National Champion, both by default, this is the team’s fourth straight Triple Grand Slam title as well.

The largest division of the second session was the 18-team Men’s 65 Major Division.

The division featured a U.S. National Championship game, as the New Jersey Hitmen edged out a thriller, 21-20, over Top Gun Elite (CA).

Bouncing back from its lost in the U.S. National Championship Game, Top Gun Elite regrouped and rattled off four straight wins to advance to the championship game.

BlueSpeed AV would make it six straight wins with a 29-18 victory, forcing the decisive “if” game.

However, Top Gun avoided the dreaded double-dip, cruising to a 28-13 win in the final game to claim the WMC title.

Eight teams advanced to the final day of play, as Last Call (NV), Wisconsin Masters, Arizona Scorpions, and Oregon Crabs and were the others. 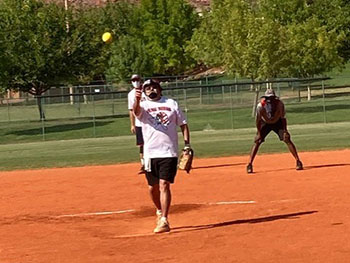 In the 17-team Men’s 65 AAA Division, North Idaho Softball Club (MT) posted a perfect 7-0 record on the week, going 2-0 in seeding, and 5-0 in bracket play, including a 17-10 win over Team Texas San Antonio in the championship game.

Eight teams advanced to the final day of play, as Los Vatos VIejos (AZ), Texas Thunder, Fierce Firearms (UT), and Carriage Homes (AR) were the others.

In the eight-team Men’s 65 AA Division, the top two seeds battled it out for the championship.

Coming out of the elimination side of the bracket, Oklahoma Street Outlaws defeated Bags Softball (IA), 15-10, in the championship game, to force the “if” game.

Avoided the double-dip, top seed Bags Softball avenged its lone loss of the tournament with a 25-19 win in the rubber match.

CLICK HERE for game-by-game scores in the Men’s 65 Divisions (make sure to refresh your page). 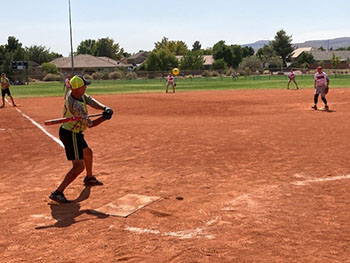 Action from the Men's 70 Major Plus Championship Game.

The Men’s 70 Major Plus Division featured a best of three game series between OMEN (CA) and Venom (FL).

The opening game of the series was the U.S. National Championship game, which Venom took 17-13.

OMEN answered back with an offensive onslaught, winning 36-19.

In the rubber match, OMEN completed the comeback, winning 25-13, to take home the WMC title.

In the eight-team Men’s 70 Major Division, Animals (CA) went unbeaten, going 3-0 in seeding and 4-0 in bracket play, including a 33-20 win over Sidewinders (AZ) in the championship game.

In the 11-team Men’s 70 AAA Division, Codgers/BCT (ID), the No. 8 seed in the bracket, posted a flawless 5-0 record in bracket play, including a 17-7 win over USA Patriots (OK) in the championship game.

In the five-team Men’s 70 AA Division, Valley Fog (CA went 3-0 in bracket play, including a 30-13 win over Franklin Loan Center (CA) in the championship game.

CLICK HERE for game-by-game scores in the Men’s 70 Divisions (make sure to refresh your page). 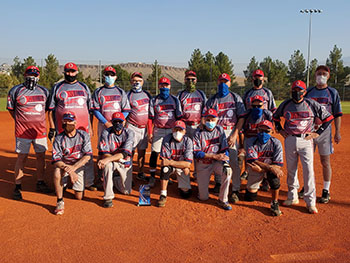 OMEN (CA) and Sidewinders (AZ) played a best of three-game series for the Men’s 75 Major Plus Division.

OMEN swept the series by scores of 13-9 and 16-8, respectively, to win the WMC and earn the Triple Grand Slam.

Every game counted in the five-team Men’s 75 Major Division, with a full four-game round robin determining the champion.

With a perfect record of 4-0, including a 21-17 win over Tharaldon’s (NV) in the U.S. National Championship Game, Venom (FL) took home the WMC and the Triple Grand Slam.

There was also a tie for third place, as Arizona Outlaws and Chicago Gray Sox (IL) tied with identical 4-2 record.

Another full-game round robin with best record wins was used to crown the champion of the six-team Men’s 80/85 Gold Division.

With a 4-1 mark, Git-R-Done 80 (CA), the default U.S. National Champion, took the top spot for the WMC title and Triple Grand Slam title.

There was a also a tie for fourth, as Redwood City Gold Rush (CA) and Top Gun Diamond (CA) posted equal 2-3 records.

Looking to even the series, Scrap Iron Grey Berets evened things out with a thrilling 24-23 win.

CLICK HERE for game-by-game scores in the Men’s 75 - 85 Divisions (make sure to refresh your page).