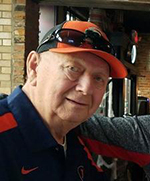 The sometimes-gruff exterior of Hall of Fame Director Jerry Jackson hid his empathetic nature – but not his strong belief in creating a fair playing field for softball teams and players.

It is thus with a great deal of sadness that Senior Softball USA announces the passing of Jerry Jackson, 73, of Perkin, Ill. Jackson died on May 22 following a long battle with cancer.

Jerry’s wife, Amy perhaps said it best: “As you know, Jerry loved all of his softball family.   Adult softball was his life.  I know that he could be rough at times, LOL, but he was that way so that things were fair for each player and team.

“He didn't mince words, and told it like it was,” said Amy.  “After reading the numerous Facebook comments I've received, it's clear to me that the softball community was happy with the way he got things done, for them, and for the game.  Of course, they did comment on how he could piss you off, but in the next sentence, they wrote how much they respected him and thanked him for all the hard work he has done all these years.”

Jerry Jackson’s involvement with the game of softball spans nearly five decades, beginning as an umpire in the early 1970s.

Jackson ran his first tournament in Central Illinois in 1981 and later became a Masters National Director with USSSA in 1993, getting his start in senior softball.

A few years later, in 1995, Jackson began his long relationship with SSUSA.  He came to the World Championships in Kansas City to get some tips on the senior game from SSUSA founder Bob Mitchell.  That dialogue set the stage for talks between all national softball associations in the first Senior Softball Summit in 1999.

“I’ve known and respected Jerry since the mid-90s, when my team played in his USSSA Senior tournaments,” said Bill Ruth, president of both SSUSA and the Independent Sports Association.  “That respect turned into a deep personal friendship, as Jerry joined the ISA board and became a national director for SSUSA.”

As a SSUSA National Director and member of the Independent Sports Association Board of Directors, Jackson was an influential figure in the game. He was involved in developing a number of key policies, including the idea of regions, that are still in place today.

“Jerry was a voice of reason and wisdom during the Senior Softball Summits,” said Terry Hennessy, chief executive officer of SSUSA.  “He became a close personal friend and we were all overjoyed when he joined SSUSA and ISA in 2000.”

Mike Caldwell, ISA chief executive, said: “Jerry was a great friend and mentor.  He loved the game of softball, and was always looking for ways to make it a fun experience for all that played. Jerry was one of the owners of ISA, served on the President’s Council, was the National Senior Program Director, and the Northern Region VP. He will be greatly missed.”

"I will miss Jerry, as he was such a good friend," added Fran Dowell, executive director, SSUSA. "Jerry was a mentor to me all the way through, as he was to so many. I learned a lot from him over the years and I will always hold him very near to my heart."

He also mentored Tim McElroy, an SSUSA National Director and ISA vice president in the eastern region - state director, Maryland: “I met Jerry shortly after becoming a director for ISA and SSUSA in 2002,” said McElroy. “He was mentor to me over the years. Jerry had a knack for understanding what was needed and when. Sometimes he gave a fiery butt chewing and other times a supportive ear. I am a better director because of Jerry Jackson. Rest easy my friend.”

Jackson has annually run the ISA Senior World Series, an SSUSA TOC qualifier, and for years was the face of SSUSA as director of the Winter National Championships in Ft. Myers, FL., one of the largest senior tournaments east of the Mississippi River.

Jerry’s wife, Amy will be carrying on for Jerry as a director of the ISA Senior Worlds this year.

"My family and I would like to thank EVERYONE for all the thoughts and prayers you have extended since Jerry passed," said Amy Jackson.  "We appreciate the kindness.  He will be greatly missed, but he just couldn't fight the fight any longer.  We were able to be with him in the hospital that day, and he knew all of us.  That was such a comforting feeling that he knew how much we all loved him.  Think of him when you step on the field this year.  He will be watching." 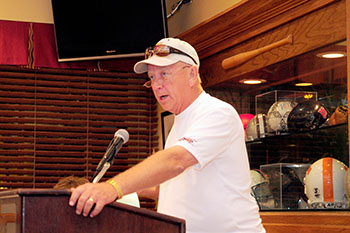