Sidewinders Club Rises in Phoenix at the 2019 Winter World Championships 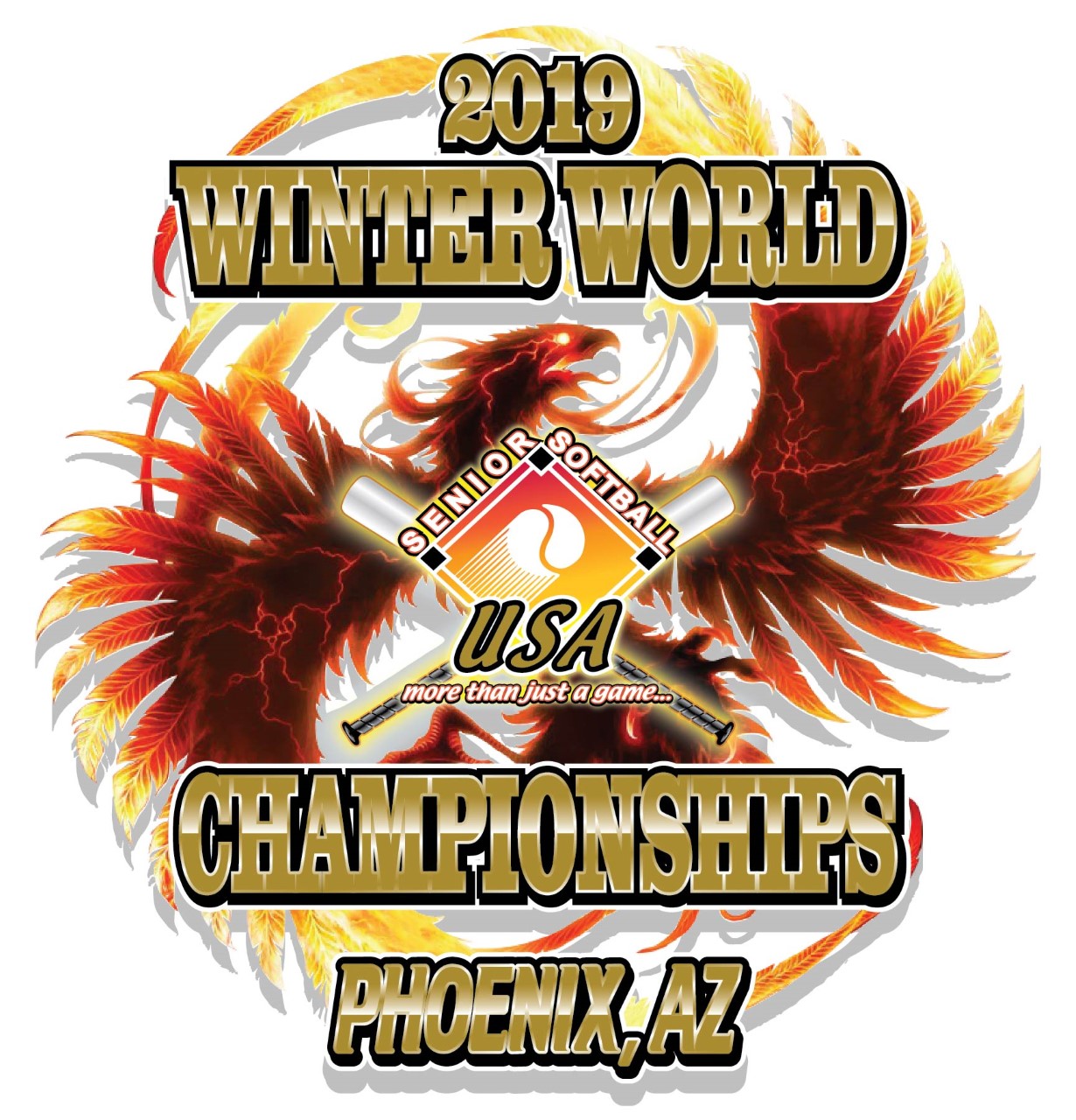 PHOENIX - The Sidewinders teams from Arizona shined bright on their home turf, as the Men’s 65 AAA, 70 Major, 75 Major Plus, and 80 AAA teams won their respective divisions at the 2019 Winter World Championships, here Nov. 12-17. 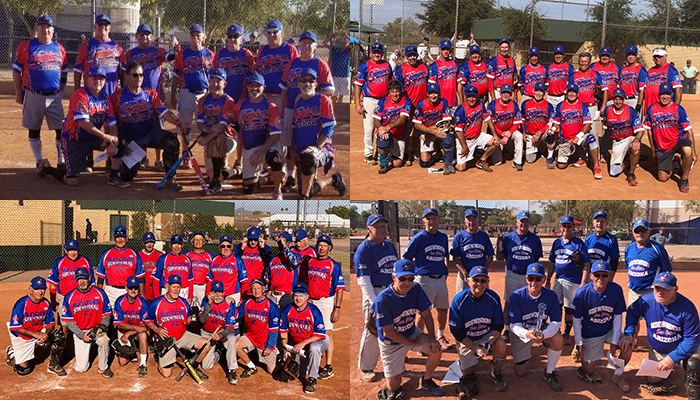 “Sidewinders are a Softball Club organized in 1992 from the Sun City active age 55+ communities:  Sun City, Sun City West, Sun City Grand, & Sun City Festival,” said Rick Kaylor, manager of the Sidewinders 70. “All are located within a 30-mile radius of Surprise.  Players are selected from these communities to play together as a competitive team.

“This year’s victories were a unique situation and a proud moment for our organization. The 75’s won first, then the 80’s, then the 70’s, and the 65’s played later in day and knew the results from earlier in day.  Everyone handled the pressure well and focused on winning.  Thus, creating a sweep by the Sidewinders in Session 1.  For the 70’s, this was a repeat win which was an accomplishment since several players from last year had moved up to the 75’s and the majority of the current team were moved up players from the 65’s.”

188 teams from 20 states were represented at the Winter Worlds this year, including as far east as Massachusetts, along with two Canadian provinces (British Columbia and Ontario).

As an official Tournament of Champions (TOC) qualifier, all division winners earned a berth to the Original TOC in Feb. 2021.

In the eight-team Men’s 65 AAA Division, Sidewinders 65 posted a perfect 4-0 record in bracket play, including a 19-5 win over Bucky’s Casino (AZ) in the championship game. Bucky’s Casino had previously won three straight elimination games, before falling short in the final.

In the five-team Men’s 70 Major Division, Sidewinders 70 completed a perfect week, going 3-0 in seeding and 3-0 in bracket play, including a 23-5 win over Desert Bats (AZ) in the championship game.

Making their debut as a 75 Major Plus team after winning the 75 Major Division at the recent LVSSA/SSUSA World Masters Championships, Sidewinders 75 swept OMEN 75 by scores of 21-11 and 19-12, respectively, in best two-out-of-three game series.

The Sidewinders 80 team made it a perfect four-for-four, as the team went 2-0 in the four-team modified single elimination bracket for the Men’s 80/85 Gold Division. Sidewinders opened bracket play with a 14-5 win over Hui Ohana 80 (HI) and capped it with a 19-9 victory over Git-R-Done 80 (CA) in the championship game. 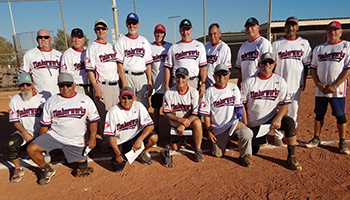 Trailing 14-7 heading into the bottom of the open, Scrap Iron High Octane put on a valiant rally, plating six runs, which would not be enough, as Arizona Scorpions held on to the one-run victory.

Following an 0-3 showing in seeding, Blue Chips (IL) posted a perfect 3-0 record in bracket play to win the four-team Men’s 65 AA Division. Blue Chips completed the run with a 28-23 win over top seed 911 Softball Club (CA) in the championship game. 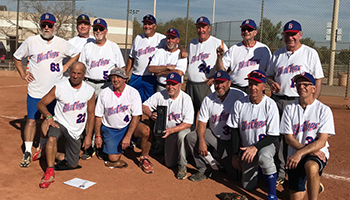 Heading into the open inning and trailing 16-11, Chicago Strikers struck with a five-run rally to knot the game at 16 all. Last Call would go scoreless in the bottom half of the open, as the game was extended into the eighth frame.

Chicago Strikers plated two runs in the top of the eighth, while Last Call tallied three in the bottom half of the inning to complete the hard fought, walk-off victory. 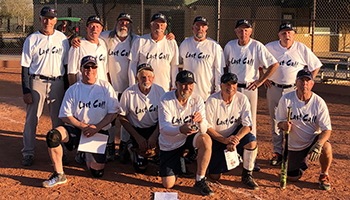 The six-team Men’s 75 Gold Division featured a full five-game round robin to seed into a modified single elimination bracket.

With the agreement of all the other teams, Tri-State Diamondbacks bowed out of the bracket as the 75 Major Champion, leaving the remaining five AAA teams to play a single elimination bracket for the Men’s 75 AAA title. 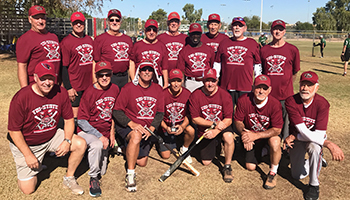 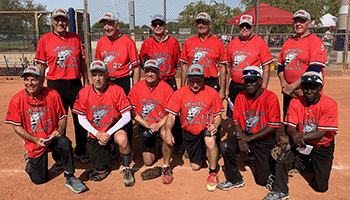 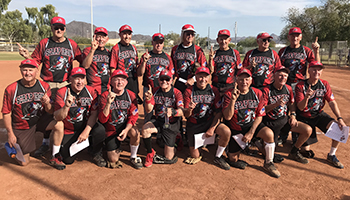 The Winter World Championships continued with the second session on Nov. 15, with the Men’s 40 - 60 and Women’s Divisions taking the field.

Looking to build off the successful Sidewinders run from the first session, the Sidewinders 60 (AZ) nearly gave the club a fifth championship, as the team finished in second place.

After splitting its two seeding games, Sidewinders entered the 12-team Men’s 60 AAA Division as the No. 8 seed. The team won four straight bracket games, including a 16-9 win over Weakend Warriors (CA), to secure its spot in the championship game.

Following their lone loss of the tournament, Weakened Warriors bounced back with a 24-17 win over Vancouver USA Wooly’s (WA) in the third-place game, and back-to-back wins over Sidewinders (12-7 and 18-17), in the championship and “if” games, respectively.

Trailing 17-14 heading into the bottom of the open inning in the “if” game, Weakend Warriors scored the four runs it needed to complete the thrilling walk-off win.

Making its debut in the 60 AAA Division after winning the 60 AA Division at the recent LVSSA/SSUSA World Masters Championships, Vancouver USA Wooly’s got off to rough start going 0-2 in seeding play. The team rebounded with an overall record of 4-2 in bracket play en route to their third-place finish.

The Men’s 40 Major Plus Division featured a best two-out-of-three game series between CB Softball (CA) and Roster Check (AZ), which saw CB Softball complete the sweep with wins of 28-13 and 20-5, respectively.

In the 16-team Men’s 40 Major Division, No. 9 seed EPT (TX) came out of the middle of the pack with a perfect 5-0 record in bracket play, including a 24-15 win over Blue Pill Mafia/QOS Networks (AZ) in the championship game.

Trailing 13-8 heading into the top of the open, EPT’s offense exploded with a 16-run inning, powered by five home runs, to cruise to the win.

After dropping their opening game of the bracket against Whitton Co./Standard Plumbing Supply/AZ Bandits, 20-18, Blue Pill Mafia/QOS Networks went to work rolling off an incredible seven-game winning streak, before running out of steam in the final.

In the seven-team Men’s 40 AAA Division, late roster changes caused a rating change for one of the teams, 4 Base Error Softball (AZ). The change moved the team from AAA to Major, introducing a five-run equalizer into the division.

As one of three teams to go 2-0 in seeding play, 4 Base Error Softball entered bracket play as the No. 3 seed. Whatever (AZ) and Phat SC (AZ) were the one and two seeds, respectively.

Of the three top seeds, 4 Base Error Softball got the championship game unscathed, winning their first three games.

In the championship game, Aces avenged an earlier 19-18 loss against 4 Base Error Softball with a 29-22 win, forcing the “if” game.

In the “if” game, Aces would forfeit the game, giving the division to 4 Base Error Softball. As the highest finishing AAA team, Aces still earned first place awards and a TOC berth.

After dropping their opening game in the bracket, 24-13, against Aces, Whatever won three straight games in the elimination side of the bracket en route to their eventual third place finish.

Crossing down from north of the border, Homer Lovers (ON, Canada) made the most of its international trek, going undefeated in the 14-team Men’s 50 Major Division, going 2-0 in seeding play and 5-0 in bracket play, including a 17-15 comeback win over JayCo/ISP (ID) in the championship game. 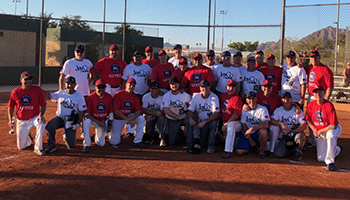 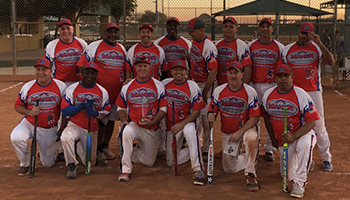 Following a loss in their bracket opener, ETX won five straight games in the elimination side of the bracket to eventually finish in third place.

The nine-team Men’s 55 Major Division saw Doeflinger (WA) go 4-0 in bracket play, including a dramatic 19-18 win over Arizona Old School in the championship game. Both teams would go scoreless in the open inning, as Doerflinger held on for the win.

Scrap Iron Rocky Mountain Thunder (CO) finished in third place after winning four straight games in the elimination side of the bracket. 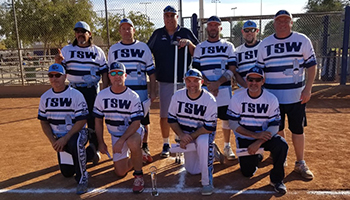 Vegas Hui also bounced back from an 0-2 showing in seeding, going 4-2 in bracket play, en route to their second place finish. Both of Vegas Hui’s losses in the bracket would come against Team Southwest/Woodies.

After dropping their opening bracket game, Hustle (TX) won five straight games in the elimination side of the bracket to finish in third place.

Kamikaze (CA) also made a valiant run through the elimination side of the bracket with four straight wins, finishing in fourth place. 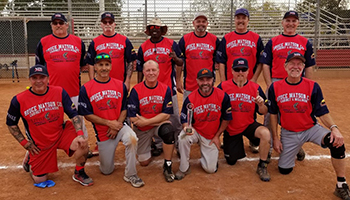 In the six-team Men’s 60 Major Division, top seed Hawaii Five-O avenged its lone loss of the weekend, 20-16 against AZ Legends in the championship game, with a 10-7 win in the “if” game. 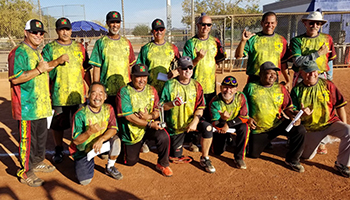 Arizona Old School went 0-2 in seeding play, but rebounded with a 3-2 record in the bracket to finish in third place.

In the seven-team Men’s 60 AA Division, top seed Texas Legends completed an undefeated weekend, going 2-0 in seeding and 3-0 in bracket play, including a 21-5 win over El Paso Bad Boys (TX) in the championship game.

After going 0-2 in seeding play and falling in their opening bracket game, El Paso Bad Boys won four straight games in the elimination side of the bracket en route to their runner-up finish. 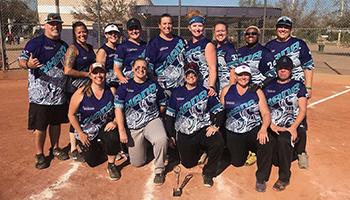 Top seed, The Purge (CA), won four straight games in the bracket, including a 27-26 nail-biter over No. 2 seed Tharaldson Softball (NV), to punch its ticket to the championship game.

Tharaldson Softball would set up a re-match in the championship game after defeated Saints (AZ), 21-19, in the third-place game.

Tharaldson Softball would get its revenge in the championship game, with a 20-13 win, forcing the decisive “if” game.

The rubber-match and division would go to Tharaldson Softball, as the team took home a 29-24 win, completing the double-dip.

S.O.AZ (AZ) made a valiant run through the elimination side of the bracket with four straight wins, finishing in fourth place. 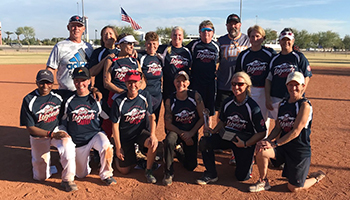 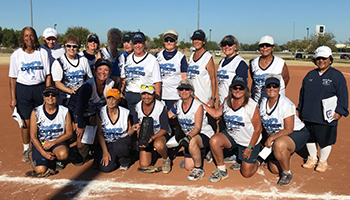 New Kids on the Block (CA) rounded out the four-team field.