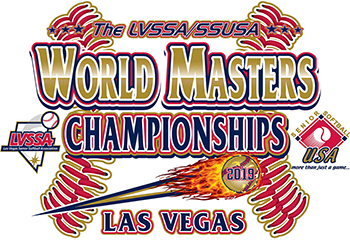 The 2019 WMC surpassed 600 teams for the third consecutive season, as 609 teams competed in nearly 1,990 games across eight complexes over 15 days.

The fourth and final session included the Men’s and Women’s 50’s age divisions, as well as the second annual International Co-Ed division.

158 teams representing 31 states, as well as the U.S. territory of Guam, two Canadian provinces, and Germany, competed across seven complexes during the fourth session.

A total of 508 games were scheduled for the final session, including four U.S. National Championship Games.

In the four U.S. National Games, which pits winners from the Eastern and Western National Championships, three teams from the West and one from the East prevailed.

To win SSUSA’s Triple Grand Slam, teams must win either the Eastern or Western Nationals, the U.S. National Game and the World Masters Championships.

Teams from California, New Jersey, Missouri, Oregon and Colorado won World Masters titles in the seven divisions that were played.

In the 11-team Men’s 50 Major Plus Division, Eastern Champion Suncoast Adidas (FL) edged out a thriller, 26-25, over J.K. Inc./Easton (CA), in the U.S. National Championship game.

Fueled by its loss in the U.S. National Game, J.K. Inc./Easton posted a perfect 4-0 record in bracket play, including a 34-14 win over Fence Brokers Team Kitty/Worth Miken (FL) in the championship game.

Fence Brokers Team Kitty/Worth Miken had won five straight games in the elimination side of the bracket to reach the championship game.

Six teams would advance to Sunday, as Nor Cal Thunderstruck (CA) and Kelleher Firm (MD) tied for fifth place.

All four pods fed into the final day of play, Championship Sunday, dwindling to 12 teams.

Looking to capture the Triple Grand Slam, PDX/DeMarini was in prime position, as the team entered Championship Sunday undefeated, going 3-0 in bracket play.

However, the team sputtered on the final day, going 0-2 on Sunday, eventually finishing in a tie for fifth along with Washington Legends.

Along with PDX/DeMarini and Washington Legends, Deluxe Bakery (NJ) and Phoenix Tube (NJ) rounded out the top four teams that advanced to Championship Sunday unscathed.

The close of the championship bracket came down to a battle for the Garden State, as Jersey teams Deluxe Bakery and Phoenix Tube would go on to play three times.

Phoenix Tube would take the first game, 27-21, to advance to the championship game, and drop Deluxe Bakery into the third-place game.

Deluxe Bakery rebounded with a 31-26 victory over Dudley Lightning (MO) in the third place game, to set up a rematch with Phoenix Tube.

In the championship game, Deluxe Bakery edged out a thrilling 24-23 win over Phoenix Tube to force the decisive “if” game.

Phoenix Tube avoided the dreaded double-dip by returning a one-run thriller, 21-20, to claim the championship.

U.S. Champ Scrap Iron/Elite was the top seed in the American Pod, while U.S. runner-up took the No. 1 seed in the National Pod.

In search of the Triple Grand Slam, Scrap Iron/Elite won its first two bracket games, before faltering against both Big Hurt/Draft Picks (IL), 20-18, and Lowe Legends (OH), 20-19, in back-to-back games.

Rebounding from its loss in the U.S. National Game, High Street Bucs looked for the ultimate consolation prize of a World Masters Championship title.

The team got off to a solid start, winning its first five games to reach Championship Sunday unscathed.

In a battle of unbeaten teams, High Street Bucs met up with 50 Degrees (MO) on Sunday, who had also gone 5-0 to reach Sunday.

50 Degrees edged out High Street Bucs, 14-13, to reach the championship game, while the loss dropped the Eastern Champs down into the third-place game.

High Street Bucs rebounded with an 18-13 win over Hawaiians (HI) in the third-place game, to punch its ticket to the championship game, setting up a re-match with 50 Degrees.

However, there would be no revenge taken, as 50 Degrees again defeated High Street Bucs, this time by a score of 22-9, to complete a flawless tournament (2-0 in seeding, 7-0 in bracket play). 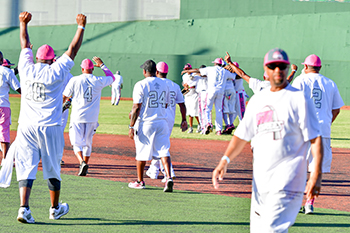 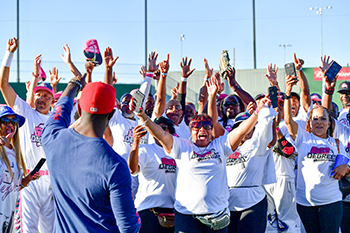 Arizona Prime Time entered bracket play as the No. 27 seed in the American Pod, following an 0-2 showing in seeding play.

The low seed would not be a detriment for the team, as AZ Prime Time got off to a strong start with three straight wins, before falling to Tom Ranalls Realty, 20-8.

Beginning Championship Sunday in the elimination side of the bracket, AZ Prime Time won back-to-back games, before being eliminated by Hawaiians, 24-21.

Gray Ghost entered bracket play as the No. 25 seed in the National Pod after going 0-2 in seeding. The team bounced back with two straight wins to begin bracket play, before dropping into the elimination side of the bracket following a 32-12 loss against High Street Bucs.

Gray Ghost would again rebound with back-to-back wins in the elimination side of the bracket to advance to Sunday.

After going 2-0 in seeding, Top Gun Diamonds got off to a rough start in bracket play, suffering back-to-back losses. With the odds of making it to Sunday against them, Top Gun Diamonds made a valiant run through the elimination bracket with five straight wins to make it to the final day.

Wacko’s, a World Masters Champ regular, made its fifth straight appearance this season, while Leftovers made its tournament debut.

The five-team Men’s 50 AA Division saw Oregon Contractors Mobile App (OR) go 4-0 in bracket play, including a 20-17 win over Manifest (TX) in the championship game. 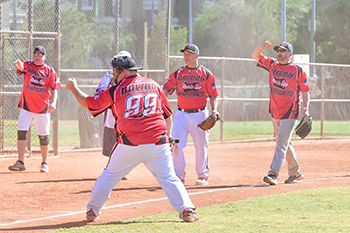 In search of its second straight Triple Grand Slam title, Old School completed the perfect weekend with a 3-0 record in bracket play, including a thrilling 9-8 win in extra innings over Karphone (CA) in the championship game.

With the game tied at 8-8 heading into the bottom of the eighth inning, Old School was able to finally break the tie that had lasted three innings, getting the lone run it needed to score the walk-off win and complete the Triple Grand Slam. 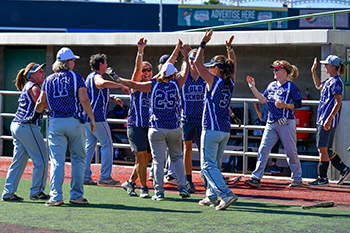 Karphone entered bracket play as the last seed following an 0-2 showing in seeding play. The team regrouped when it mattered most, posting an overall record of 3-2 in the bracket, en route to its runner-up finish.

After dropping their first two games in the bracket, Florida Girls rattled off three straight win-or-go-home games, to finish in third place.

The eight-team Women’s 50 AAA Division would see the title decided by the “if” game between the top two seeds.

NW Lady Legends continued its strong performance in bracket play, winning it first three games, including a 16-15, walk-off win over 50 Caliber KC to punch its ticket into the championship game. NW Lady Legends scored four runs in the bottom of the open to complete the comeback.

Dropping down into the elimination side of the bracket, 50 Caliber KC would work up some walk-off magic of its own. Facing another Northwest team in the third-place game, NW Lady Warriors (WA), 50 Caliber KC plated a pair of runs in the bottom of the open inning to complete the 15-14 come-back victory.

The win earned 50 Caliber KC a spot in the championship game, setting up a re-match with NW Lady Legends.

In the championship game, 50 Caliber KC held off a rally by NW Lady Legends, earning a 12-11 win to force the “if” game.

In the decisive game, 50 Caliber KC cruised to a 17-9 win over NW Lady Legends.

The Bavarian Royals from Germany made its second straight appearance in the tournament, while LVSSA fielded a team again as well. A third team, Latin-American, included two players from last year’s Panama team that was unable to attend this year’s tournament, along with other local players from Las Vegas. The fourth team was Colorado Hitmen.

The teams were then seeded into a modified single elimination bracket.

In the championship game, Colorado Hitmen scored a pair of runs to complete the 14-13 walk-off win over Latin-American, the team’s first loss of the tournament, forcing an “if” game.

In the “if” game, Colorado Hitmen continued its run, winning the final game with ease, 13-3. 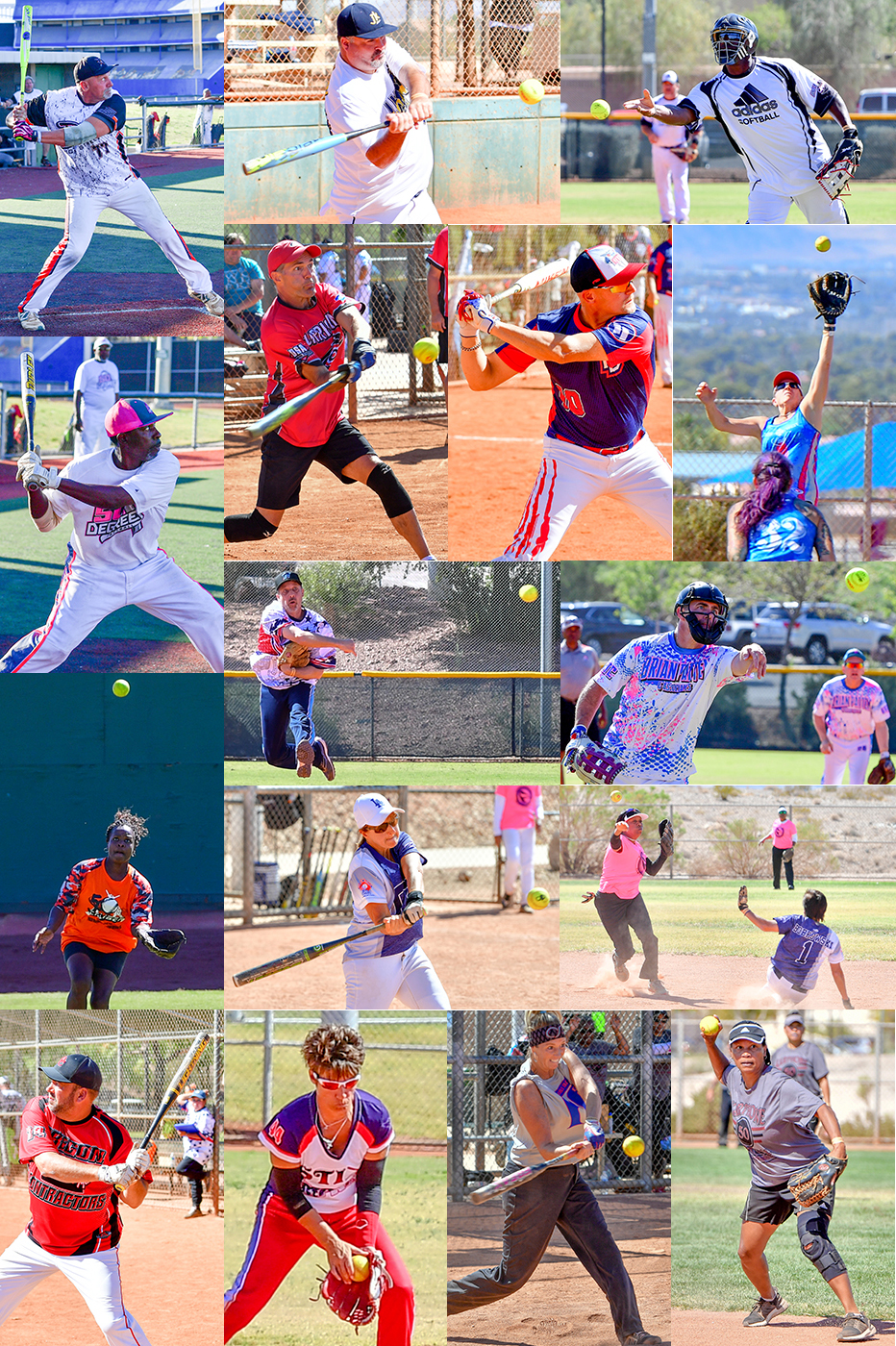