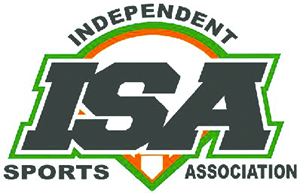 COLUMBUS, Ind. - The 2019 ISA Senior Word tournament was once again held here, July 26 - 28. The location allows for a wide range of teams to earn a world title on some of the best fields the state has to offer.

This event also awards the champions a berth in the prestigious Tournament of Champions, which is held by Senior Softball USA in Florida each February. The TOC is an “Invite Only” event where only champions of major qualifying events are invited. This year, 50 teams from 10 states gathered here to battle it out.

In the loser’s bracket, Lowes beat the Magic 25-13 to advance and Big Hurt a second time, 19-16, to advance to the third-place game. However, Dayton ended the winning streak of Lowes with a score of 19-12, securing their spot in the championship game. With a score of 25-19, 50 Degrees won, claiming back-to-back titles.

Down in the losers’ bracket, Pope beat Busters 14-7, Dayton 19-17, Dudley 21-20 and Derby City 16-15. They advanced to the third place game where they met Doug & Don’s and continued their winning streak with a score of 26-25. Facing off in the championship game was 1 Under and Pope. With a score of 18-16, 1 Under claimed their first ISA World Title. 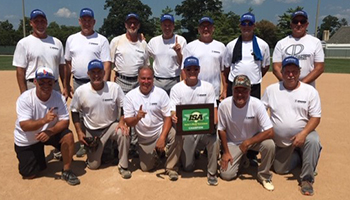 In the losers’ bracket, Old Star’s beat Eclipse 14-13 and then beat CPOA 15-5 to claim their spot in the championship game.  With a score of 26-17, Team Illinois beat Old Stars to claim their title. 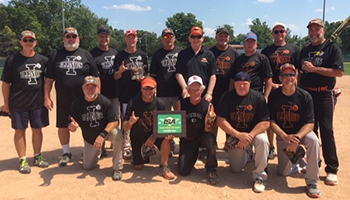 In the opening rounds of play, top seeded Windy City beat Dudley 16-12 and Motown 14-13 to capture the winner’s bracket final.

In the losers’ bracket, Clean Planet beat the Chiefs 13-12 and Chicago Prime 18-14 and Dudley, who they beat 16-6 to advance to the third-place game. There they topped Motown 11-4. The championship game was where Clean Planet’s winning streak ended, when Windy City won with a score of 17-16.

Kicking off the bracket was the No. 5 seed Old Stars, who fell to the No. 4 seed, Champaign Softball, 15-14. Champaign advanced to play the No. 1 seed Chicago Panthers, where they fell 20-11. Meanwhile, the No. 3 seed Scrap Iron played the No. 6 seed Merchants, where Scrap Iron won 18-17. Scrap Iron advanced to play the No. 2 seed Playmakers, where they fell with a score of 14-7. Facing off in the winners’ bracket final was Playmakers and Chicago Panthers. With a score of 15-14, Playmakers claimed their spot in the championship game.

In the losers’ bracket, Scrap Iron beat the Old Stars and Champaign topped the Merchants 19-18. In the third game guarantee round, Scrap Iron beat the Merchants 23-22 and Champaign beat Old Stars 14-10. Champaign then faced Scrap Iron and won 20-18. They advanced to force a rematch with the Panthers, but lost 17-14. The Panthers qualified to meet the Playmakers for the second time in bracket play and for the Championship. And with a score of 18-17, the Playmakers claimed their title.

65 + Division:  The 65 + division consisted of two 65 Major teams; MN Masters/Ancell and Motown Stars  65’s (MI);  three 65 AAA teams; By Grace Redeemed (TN), Minnesota Blizzards, and MP Comp./Bomb Squad(MI); and to 65 AA teams; Blue Chips 65 (IL) and Indy Fog 65’s. These teams played a mixed three-game round robin and then broke off into their own brackets 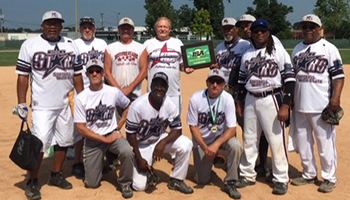 65 AA: In this two-team bracket, Indy Fog faced off with Blue Chips. Indy fog won the first game 16-11 and the Championship game 18-4 to claim their title. 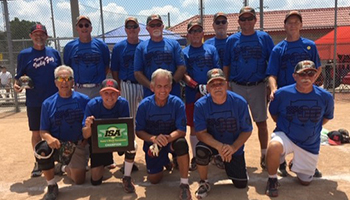 In the end, the tournament proved to be a world class event with 149 games in a three-day period. There were 44 one-run ball games and 20 games that ended with a three-run difference or less. We would like to thank all of the teams that participated in the event and send a special thanks to the Columbus Convention and Visitors Bureau and to the staff of Lincoln Park & Dunn Park who kept the park and fields at a level of perfection throughout the tournament.